create a possibility for all women and men to be part of the network in Iceland, Reykjavik.

The introduction will be November 16th in Reykjavik, Iceland. The organization was

founded in 1998 and has today many sister organizations such as Sweden, Norway,

Africa and St Petersburg. Iceland will be the 6th country that can offer all women to

Charles von Hofsten, will be present at the opening in the Nordic House in Reykjavik.

The organization is one of the largest non-profit women organizations, represented in more

than six countries. Vigdis Thire, who was the initiator to the organization in Oslo, Norway, is

also the initiator to the startup in Iceland.

The vision for 1,6 & 2,6 million Club is to improve the quality of life for all women, to ensure

that all women can receive best possible health care, both physical and mental, and to enter

the gender aspect in all levels of society. The organization has raised its profile

wider context. The 1,6 & 2,6 Club has been very successful in influencing the European

Parliament to put women’s health on the agenda.

The 1.6 & 2.6 million Club collects money donation for research in medicine and health for

women. Over the last five years, the association has awarded scholarships of approximately 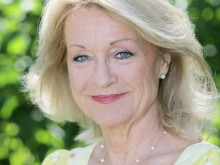